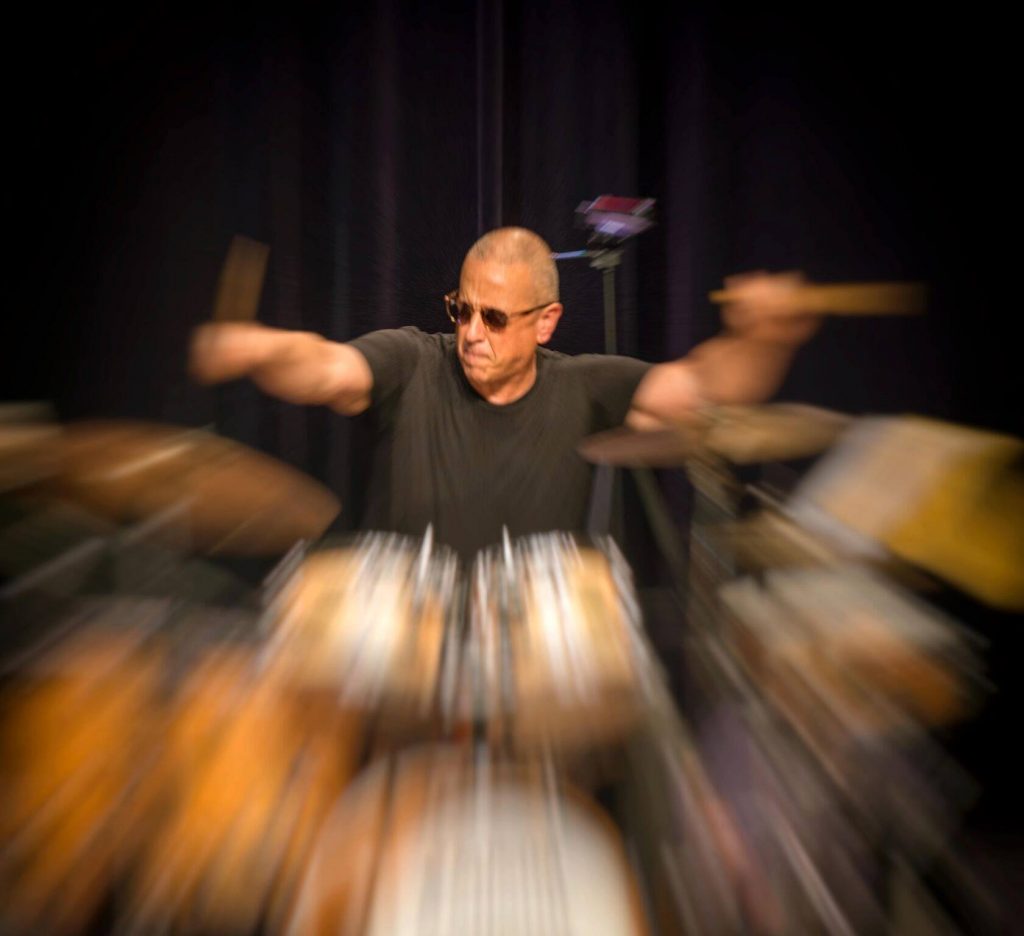 A native of Donora, PA, Jae Sinnett came to Virginia in the mid-70’s to serve in the United States Navy.  After completing his military service, he began his music career by first attending Norfolk State University as a Music Education major.  He evolved into a consummate drummer, composer and bandleader who has produced 15 albums – the first of which, Obsession, was released in 1986.  Featured were the former director of the Count Basie Orchestra, Frank Foster, on tenor saxophone, John Hicks on piano, Wallace Roney on trumpet, Steve Wilson on alto saxophone and Clarence Seay on bass.  The swinging sextet album Blue Jae was released in 1992.  House and Sinnett was released two years later and featured Cyrus Chestnut and Steve Wilson.  Listen was released in 1997 with Jesse Davis on alto saxophone, John D’Earth on trumpet, Billy Pierce on tenor saxophone, and Allen Farnham and Cyrus Chestnut on piano.  It went to the number one spot on the Gavin Jazz Radio Charts that July.

Jae’s “masterpiece” album The Sinnett Hearings was released in 2005 and features some of his best writing, arranging, and drumming.  This is the first of his eight releases in which he wrote and arranged every composition.  The Sinnett Hearings became his first jazz album to debut at number one on the national jazz radio charts in January 2006.  It’s a beautiful and powerful vehicle that highlights the high-level musicianship of the group, as well as a soulful mix of thought-provoking grooves and improvisation.

The explosive It’s Telling…A Drummer’s Perspective was released in 2008 and became Jae’s most played album on Pandora.  Every song is designed to feature Jae’s extraordinary drumming.  It features his trio and saxophonist Steve Wilson.

“This is the recording I’ve always wanted to do to showcase what I feel is my true drumming ability.  Every song is designed to feature the drums in various capacities.  Truly, a compelling piece of work.” – Jae Sinnett

Complex, dense, introspective, and visionary, It’s Telling…A Drummer’s Perspective has it all and demonstrates the extraordinary musicianship of each member in the group.

Subject to Change, Jae’s 13th album, was released in August 2014.  It received positive reviews and debuted at the highest spot on the JazzWeek Radio Chart.  The musicians participating in this recording were Jae on drums and keyboards, Steve Wilson on alto and soprano saxophones, Justin Kauflin on piano and keyboards, Terry Burrell on electric and acoustic bass, JC Kuhl on tenor saxophone, Rob DeDominick and Bill Brown on trumpet, and Duane Smith on electronic trumpet (#4).

In 2016 Jae released his critically acclaimed album Zero to 60.  This marked his return to straight up jazz featured in the classic jazz quartet setting.  Featuring Ralph Bowen on tenor saxophone, Allen Farnham on piano, Hans Glawischnig on bass and Jae on drums, Zero to 60 reached number one on the national JazzWeek Radio Chart for the week of April 4, 2016 and stayed in the top 50 for 20 weeks.

Following Zero to 60‘s success, Jae released his 15th album The Americana Groove Project in September 2018.  The album is a mix of funk, blues, rock, soul, and jazz fusion.  Jae also makes his singing debut on five tracks – Gotta Roll, Diddley Strut, Slights and Slings, Burnin Berman, and Higher Calling.  The musicians participating in The Americana Groove Project are Jae on drums, keyboards, and lead vocals (tracks 2, 3, 5, 7, 9 – Rap (1)), Terry Burrell on bass, Jay Rakes on guitar, and Weldon Hill on Hammond Organ.  Special guests include Justin Kauflin on piano and keyboard for tracks 1, 2, 4, 8 and 9, as well as Jennifer Gammill on background vocals for Burnin Berman.

In 2020, the year of the pandemic, Jae released his follow up Zero to 60 Quartet recording….Just When You Thought… featuring Ralph Bowen, Allen Farnham and Jae’s long time bassist, Terry Burrell. Just When You Thought spent an incredible 24 weeks in the top 20 on the national Jazzweek radio chart….peaking at number 8!!! The record reflects the amazing versatility of the musicians. Every song is different… from soul jazz to straight ahead swingin to fusion….these guys can truly do it all! Some of the best musicians playing today.

Jae’s first performance/instructional video Musical Drumming Concepts was released in 2001.  Modern Drummer magazine rated it an 8 out of 10.  It highlights his compositions, philosophical teaching skills and drumming in various styles, meters and straight and swinging eighth note concepts.  The trio released their first live concert DVD, An Evening with the Jae Sinnett Trio: Live at WHRO in 2009.  The DVD was recorded in the television studios of WHRO, a public broadcasting station for the Hampton Roads, VA region.

Jae has written over 250 compositions.  He has also scored music for five documentaries – one of which – John Biggers: Stories of Illumination – was aired on PBS.  Jae’s dream of having his trio perform with the Virginia Symphony Orchestra was realized on October 10th, 2014 at the Ferguson Center for the Arts in Newport News, VA.  The performance was met with outstanding reviews. Just also penned the new theme song for the radio show Another View heard on WHRV FM 89.5.

Jae’s other professional life has him in his 30th year in 2020 as the jazz producer and host for NPR affiliate WHRV-FM 89.5 in Norfolk, VA.  Jae hosts the popular jazz show Sinnett in Session Monday through Thursday evenings from 9 pm to 1 am and Sunday afternoons from 1 to 5 pm EST.  He also hosts The R&B Chronicles, heard Friday evenings from 7 to 8 pm.  Both shows can be heard on demand at mediaplayer.whro.org/person/jaesinnett.  His Sinnett in Session jazz radio show is one of the highest fundraising revenue-producing four-hour jazz shows in the country.

At the 2018 JazzWeek Summit in San Jose, CA, Jae was awarded the prestigious Scott Willis Jazz Impact Award.  in 2020 he was awarded the even more prestigious Duke Dubois Jazz Humanitarian Award. Nominated by his peers in the industry. Jae also has been nominated several times for Jazz Programmer of the Year.

As a jazz educator, Jae taught history, theory and percussion at the Governor’s School for the Arts in Norfolk, VA for eight years.  He also directed the GSA Big Band and Jazz Combos.  He was an adjunct drum set and jazz ensemble instructor at Christopher Newport University in Newport News, VA.  Jae attended Norfolk State and Old Dominion Universities as a music education major.  He is a Sonor Drums and Sabian Cymbals artist and has been sponsored by both companies for over 20 years.  He’s also a touring clinician and music educator, conducting master classes at many universities and appears as a guest artist with the ensembles performing his compositions.